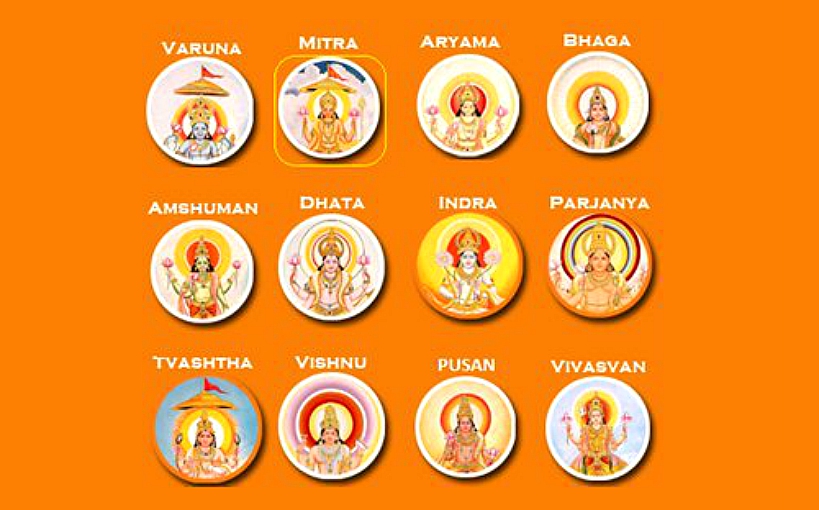 Aditya means him whose mother is Aditi. The Adityas are children of Aditi, mother of gods and Kashyapa Prajapathi, the grandfather of all creation. Adityas are solar deities who reside in the heavenly regions and personify various natural phenomena. There is an inconsistency about their number.

Originally they were described to be six or seven in number in the Rigvedic hymns, of whom Varuna, Mitra, Savitr and Pusan were the most prominent. Later the number increased to 8 and Aditi was described as the wife of one of them, besides being the mother of all Adityas. Subsequently, the number increased to 12. In some Vedic hymns, Indra and Agni are also described as children of Aditi. By the time of the Puranas Aditi became the mother of all divinities numbering some 330 million. So practically all the gods became Adityas.

The Adityas represent light. Of them, Surya, the sun god is the most prominent. Their names are also used as the epithets of Surya, suggesting their connection with one another and their nature as light beings. “Bright and pure as streams of water, free from all guile and falsehood, blameless, perfect,” these are gods of light, with many eyes (rays) corresponding to the 12 months of the year and described as the 12 spokes of the wheel of time.

The Adityas are upholders of Laws. ” Upholding that which moves and that which moves not, Adityas, Gods, protectors of all beings, provident, guarding well the world of spirits, true to eternal Law, the debt-exactors,” they illuminate the world, drive away darkness, nourish the beings, regulate relationships and personify the laws of the universe and mankind. “Golden and splendid, pure like streams of water, they hold aloft the three bright heavenly regions. Ne’er do they slumber, never close their eyelids, faithful, far-ruling for the righteous mortal.” Lord Vishnu was originally a solar deity and later elevated to the status of a trinity God as the preserver of the world, who incarnates upon the earth from time to time to rescue the world and the dharma from the oppression of evil and social disorder.

There is no unanimity about who the Adityas are. According to one listing, the 12 Adityas are Mitra, Varuna, Aryaman, Daksha, Bhaga, Amsa, Tvastr, Savitur, Pusan, Sakra, Vivasvat and Visnu. In another listing, we find Dhatri, Mitra, Aryaman, Rudra, Surya, Bhaga, Vivasvat, Pushan, Savitur, Tvashtir and Vishnu mentioned as Adityas. Ancient Persians who practised Zoroastrianism had their own list of seven Adityas. We have given a general description of some of the Adityas already elsewhere on this site.

CAB is in line with UN Minority Rights Declaration,...