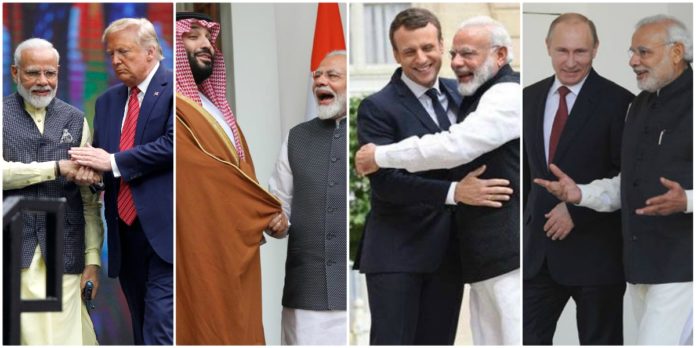 Article 370 abrogation created political tremor in the country. Some people supported it and some opposed it. So far the situation is under control and not even a single bullet fired in Kashmir valley. It may take some more time to things come into the track, We all should have a responsibility and should give some more time to Government. On the other hand, if we look at the international community reaction, the situation is in favour of India from the USA to Russia including the Gulf region. In diplomacy, no country will support us freely. For every support, many things such as lobbying take place through back door. Based on the country’s interest they decide whether to support or not.

From the last five years, Modi Government has performed well in Foreign policy especially the Gulf region. Gulf countries have changed their policy on the Kashmir issue. Earlier they were inclined towards Pakistan, now they are neutral. It won’t be a surprise, even if they change their stand to the support of India in the future on this matter. All of this is because of India’s billion-dollar market. Major countries in the region including Pakistan’s close allies are also mute on Kashmir move. UAE went a step ahead and called the move as “India’s internal matter”. It’s a drastic change in the country’s foreign policy in South Asia since Independence. UAE’s support to India could be caused by many reasons like Modi’s personal relation with Al Nahayan, respecting 42% of Indian diaspora in UAE, big trade with India (India has become the 2nd largest trade partner), etc. Interestingly UAE conferred Modi with it’s highest civilian award “Order of Zayed”, It shows the UAE’s commitment towards India.

Saudi Arabia’s silence on this issue has many reasons including Saudi investments in India. Some major investments are also under planning, Saudi Aramco is interested to purchase 20% of RIL refining and petrochemicals business. Saudi Arabia occupied second place in crude oil exports to India after Iraq. After RIL deal, it may emerge as the largest crude oil exporter to India. Another one is Saudi led Aramco and UAE led Adnoc with India’s IOCL, BPCL, and HPCL together planning to set up new refinery plant at Ratnagiri in India’s western state of Maharashtra with 44 billion USD.

Though Pakistan is a neighbour to Iran and these two countries share common interests like Balochistan issue, peace in Afghanistan and handling Taliban etc, circumstances are forcing Iran to take a neutral stand. Since India is one of the biggest markets for Iran crude oil and India is investing in Chabahar port which is expected to give strong competition to Chinese Gwadar port in Pakistan.

Though the USA’s stand on Kashmir is “Bilateral issue”, ambiguous statements came fromUS Presidents. Earlier Obama and now Trump have shown interest to offer mediation on the Kashmir issue. There may be many reasons behind president statements and offering to mediate. Pakistan might put pressure on the USA for better Afghan peace process deal, as a comfortable exit from Afghan is difficult for the USA without Pakistan support. On the other hand, the USA is one of the important strategic friends to India in the present world. USA has backed India in many cases, like India’s MTCR membership, Masood Azhar’s ban and more, and India also needs USA’s support in future for example to counter China, getting into NSG club, UNSC permanent bid and for putting pressure on Pakistan to stop state-sponsored terrorism.

Due to Brexit, Germany’s economic struggle, Italy and Greece’s financial recession, France’s slowdown made European union voiceless in the world compared to earlier years. Still, they are major economies in the world and a couple of them are P-5 members. Imran Khan expected much support from Boris Johnson, but Boris was mute. Germany and France did not make any statement on Article 370 abrogation yet. But they back India’s stand on the Kashmir issue. France is one of the closest allies to India in Europe. France was one of the few countries in the world which supported India’s Pokhran II.

In South Asia, many countries supported India’s move and called move as “India’s internal matter”, other than Pakistan no country in South Asia would go against India’s interest because of many reasons. India is a big power in the region and many economies in the region like Bhutan, Nepal, and Bangladesh depend on India. After Ibu took oath in last November, Maldives is backing India steps, respecting India’s opinions and considering India’s concerns. The current government in Srilanka welcomed India’s move and appreciated making Ladakh as separate Union territory only region with Buddhist majority.

On behalf of its friend, China has requested UNSC to conduct closed room meeting on Kashmir issue after more than 50 years. However, the result of the closed room meet is almost zero. Nowadays, China is a bit aggressive against India. It did not support India to ban Masood Azhar as a global terrorist in UNSC for a long time, It is stopping India’s candidature in NSG, violating India’s sovereignty by helping CPEC. China’s move to UNSC on Article 370 abrogation is also a violation of India’s sovereignty. With all these moves China might hurt bilateral relations. When it is not ready to respect India’s sovereignty, why should India respect China’s? Now, the time has come to rethink New Delhi’s approach towards Beijing. Up to some extent, New Delhi should consider expressing concern on the South China issue, Taiwan or Hong Kong issue. If New Delhi’s approach does not change towards Beijing, it will not be a surprise, even if China says Kashmir is not a bilateral issue.

The author is a Research Scholar, IIT Varanasi, Past Masters student at IIT Madras.