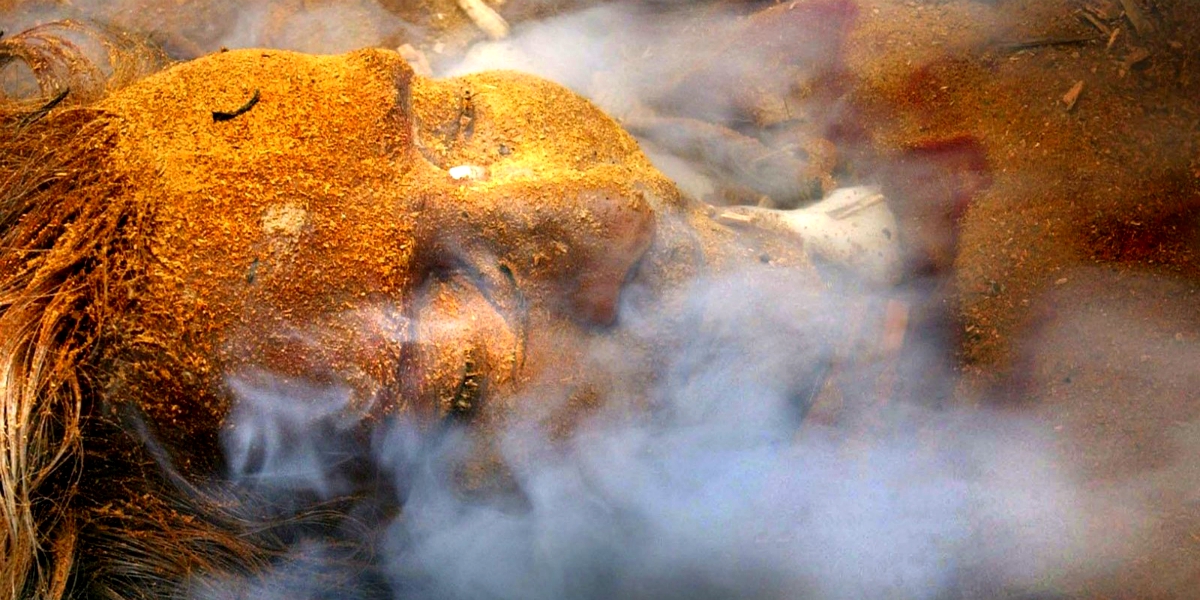 Hindus traditionally cremate their dead because a fiery dissolution of the body brings swifter, more complete release of the soul than burial, which preserves the soul’s psychic connection to its just-ended earthly life. After death, the departed soul hovers close to the earth plane in its astral body, emotionally attached to the physical body and its old surroundings, still able to see this material world. The funeral rites and burning of the body signify spiritual release, notifying the soul that, in fact, death has come. Some of the funeral chants address the deceased, urging the soul to relinquish attachments and continue its spiritual journey. The Gods and devas are invoked to assist the soul in its transition. The fire severs ties to earthly life and gives momentum to the soul, granting at least momentary access to refined, heavenly realms. All attention is on a singular goal, as expressed in this prayer from the Rig Veda: “Release him again, O Agni, to the fathers. The one offered to you now proceeds to his destiny. Putting on new life, let him approach the surviving, let him reunite with a [new] body, All-Knowing One!” (10. 16. 5).

There are mainly three types of process:

Apart from the above, body being consumed by vultures and other birds or beasts, being preserved in caves, and mummifying are the three more methods being used in ancient times.

The state of things before the composition of the Rigved cannot be said with certainty. There is no general agreement as to the age of Rigved and of the ruins found at Mohenjodaro and Harappa. Some scholars refer to complete burials. The excavation at Lauriya Nandgarh has brought to light supposed Vedic burial pounds in which, has been found a small golden plaque bearing the figure of a nude female, the Earth Goddess, Mahakali.

Antyesti or Hindu final funeral rites is an important sacrament of Hindu society. Extensive texts of such rites are available, particularly in the Garuda Purana. There is wide inconsistency in theory and practice, and the procedures differ from place to place. Further, these rites also differ depending on the caste, jāti, social group, and the status of the deceased person.

About 4000 years before, in the Indian subcontinent, human bodies were either exposed to the elements of nature, and to the birds, or buried in the earth, in a river, and sometimes a cave or an urn. Centuries later, cremation became the usual mode of disposal of the dead bodies, with certain exceptions – the exceptions being bodies of infants, yogis, sadhus, and a few others. Cremation became popular due to the notion that the soul cannot enter a new body until its former one has totally disappeared, and cremation was considered the fastest way to expeditiously dispose of the dead bodies.

According to Hindu customs, the body of a child under 28 months is buried and not cremated. In some castes of Hindus, bodies of children up to the age of three years are buried. Mortal bodies of sannyasins are buried even now. A temple is constructed in the name of the sannyasin in that place. This is Boo samadhi.

As is well known, the Parsi way of disposing of the dead is by keeping the corpse on serrated platforms on the terrace of the Towers of Silence (known as the dokhnas) to be eaten away by vultures and other carnivorous birds. This was the Parsi way of showing respect to the environment, by not burying the cadaver which defiles the earth, nor sullies the fire by cremating the dead. For Parsis, the fire is holy and is revered in their temples.

Hindus avoid converting the whole or major part of our land surface on the earth into a wide graveyard and to dump one dead body over the other at one place. Cremation is the best method of disposal of a dead body, with due respect, honour and affection. This is agni samadhi.

Every Hindu long to die on the banks of the Ganges River so that their body can be cremated and the ashes deposited in the river. Or Ashes (bones) are respectfully collected from the cremation place and immersed in nearby holy water with appropriate respect. (After Agni samadhi, Jal samadhi is also done).

Those persons accidentally carried away by water, and their bodies if could not be found out, it is an honour to say that they attained Jal samadhi.

No post-death obsequious rituals are done for a person who has a violent and unnatural death like an accident, suicide, murder, jumping into the water, falling from a height, being killed by an animal etc. For these no mritakam (impurity) is observed by the family members and they become purified immediately upon the disposal of the corpse which should be cremated without any rituals.

Nirvikalpa Samadhi is a preparatory step to Maha Samadhi and serves as extreme uplifting of all body vibration and leads to complete healing of karmic wounds to the open doors to God and divine love for further progress on your way to God.

Enabling the physical body to be placed in a tomb in jeeva samadhi at will, in a state of suspended animation, where the blood circulation and the breathing have stopped but a luminous pranic energy keeps the body-cells alive, with the  possibility of the siddha dematerializing the body in the tomb and materializing it outside in a completely different locality and living out an extended span of life for several years.]