Ever since time immemorial, the truly devout have served Lord Rama, praised and worshipped him, idolised him and have propagated his preachings. Lord Rama, the great blue Lord, the opulent one, he who delegates absolute salvation had descended to ‘Mrityuloka’ in the Treta, the second Yuga not only to absolve many of those who were ‘a-sur’, but also to set an example of the ideal conduct, bring about a whole new meaning to one’s ‘dharma’ and most importantly, provide a yardstick with reference to which all would measure one’s ‘dampatya’. Is it not most ironic, that the great saviour is held in contempt of women by many who don’t just know? Is it fair to the Lord, who gave us the benchmark for a ‘sadachari’ spouse, who always led by example, that we demean him for following the law of the day? More importantly, would the ideal wife, Devi Sita ever accept him, if he shied away from upholding the law and the very honour of his lineage?

If one really speculates, then it has been mentioned in many scriptures that the Lord’s karma became intertwined with another, and it resulted in an adverse ‘pratikriya’, a curse, which led to the unfortunate turn of events. The Lord, who holds himself answerable to karma, graciously ceded and gave us a life of example, with thresholds impossible to cross.

The omnipotent, omniscient and ever-present Lord, one whose benevolence is absolute, for he provides only Moksha, ‘tarini’ to all those who hold him, dear, has only ever asked for surrendering unto him, for his presence is enough to cleanse, sanctify and purge our souls, our lives, just as Surya illuminates the worlds; in his gospel has propounded the soul’s one true philosophy, explaining to all those who believe, the benefits of living a virtuous life and having a path with meaning. He showers his affections, on all those who wish to emulate, and by living the way he lived, proves in effect that the light, righteousness, and dharma prevail in the face of any adversity, ultimately. To emulate the Lord, one must understand him, for what is the point of reciting the Holy Ramayana, if one doesn’t share Rama’s happiness, and mourn Rama’s sorrow?

If history is to be believed, the time of the Great Lord Rama’s coronation, his rajyabhisheka, is just past – which by corollary means to say, this is the time Ramarajyam began to get established. What better way to follow the God-Samrat, one whose beneficence knows no bounds, whose ‘varchasva’ is beyond sacrosanct, than to establish Ramarajyam in our lives, in our hearts? What better way, what better time to accept his supremacy over us, than this Chaitra? Is it not for us to value our own ideal, who is a better role model than Rama himself? If only we try, each home would be a Ramarajyam.

He always led unto the real, ultimate destination, his Rajyam stood resolutely, his ascendancy was absolute and his holy word the ‘law’. Such is the glory of the Great Sri Rama, who forgives and absolves; he whose intention may never be doubted, he who always redeems, the best well-wisher one can have, he who is our saving grace.

The greatest advocate for dharma gives us his word that he who follows shall attain salvation; he is one of his words. He whose true glory we simply cannot behold and fathom shall make us his own, if only we endeavour to make him ours. If we even try to do right, in our own ways, we shall get closer to him. Let us try this year, to hold ourselves to his, the highest of standards and in our own small ways, live by him and his virtues. Let us remember our Great Lord Sri Rama Chandra. Run for Unity: Lakhs of people from more than... 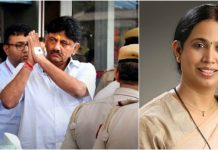 Mysteries of a Nation