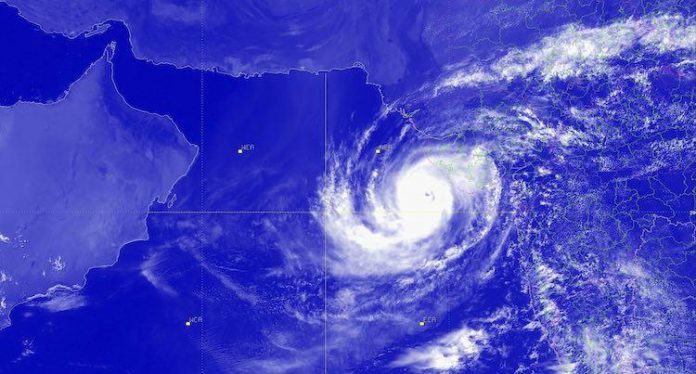 The Deep Depression over Lakshadweep and adjoining South-East Arabian Sea has intensified into a cyclonic storm. As per the convention, it has been named by meteorologists as “Maha.”

It a weather bulletin, the India Meteorological Department, IMD, said the cyclone is moving in the north-westward direction at a speed of 26 kilometres an hour when last observed early this morning. It is at about 80 kilometres East-South East of Kavaratti in Lakshadweep and 440 kilometres West-North West off Tiruvananthapuram.

Weather officials in Chennai said cyclone Maha is set to gather more steam to become a severe cyclone by today, and further into a very severe cyclone by tomorrow. Under its influence, most places in south Tamil Nadu, Kerala, Lakshadweep and coastal Karnataka are expected to receive rain for the next two days.

The IMD forecast says Lakshadweep will witness extremely heavy rain in many places and very heavy rain in some parts of Kerala. Several places in southern districts of Tamil Nadu are witnessing light to moderate incessant rain since yesterday. Ramanathapuram, Puducherry, Karaikkal and four taluks of the Nilgiris districts and Kodaikkanal taluk in Dindigul have declared holiday for schools due to rain.

Many lakes in Tiruvallur district have reached their full capacity due to copious inflow. The four major reservoirs that cater to the drinking water needs of Chennai that were bone dry till recently have received 2.4 trillion cubic metres of water so far and the inflow continues to be impressive. Protestors from Kerala involved in UP violent attacks, say...