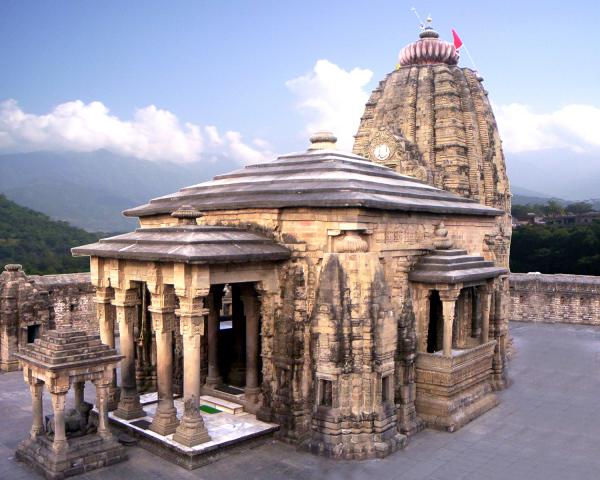 Baijnath Temple is a revered shrine of Himachal Pradesh. Located at a distance of 16 kms from Palampur in the Beas valley, Baijnath Temple is dedicated to Lord Shiva. According to the inscriptions on the walls, Baijnath Mandir was built by the two native merchants by the name of Ahuka and Manyuka in 1204 A.D. In the porch of the temple, the two long inscriptions state that before the present temple, there was a shrine of Lord Shiva at the same spot.

The structure of this temple gives the hints of the early medieval North Indian style of architecture. This type of structure used to be known as ‘Nagara’ style of temple. The architectural style has been imbibed from Orissan style, which is very much unique in the state of Himachal Pradesh. The exterior walls of the temple have numerous alcoves with images of gods and Goddesses from the Hindu pantheon.

In order to enter the temple, one has to cross the vestibule that has a large ‘Mandap’ in the centre and two huge balconies on either side. The temple has fortifications, leaving space for two entrances in the north and the south. Just before the Mandapa, there is small porch placed on four columns. Here, a huge image of Nandi (the bull of Lord Shiva) is placed. The door leading to the sanctum is speckled with many images of artistic nature.

Lord Shiva is commemorated here as Vaidyanath (the Lord of Physician) and is placed in the form of ‘Lingam’ (phallic form of Lord Shiva). The main sanctum comprises five projections on every side and a tall curved shikhar (spire). The history of Baijnath temple is inscribed on the stone slabs inside the complex. As per the beliefs, Ravana (King of Lanka) had worshipped Lord Shiva in this temple.

The water of this temple is believed to contain medicinal properties, which can cure diseases of people. Due to this reason too, Baijnath Temple receives thousands of people every year. Shivratri is the major festival that is observed at this temple with full gusto and fervor. Devotees visit the temple during this time to seek the blessings from the God.

Besides the shrine of Lord Shiva, there are many other small shrines dedicated to Gods and Goddesses. In the early 20th century, the temple was suffered from an earthquake. Raja Sansar Chand made an effort to renovate the temple after the calamity. The temple complex acquires lush green gardens, which makes a perfect foreground to the ancient and unique structure of this temple. Baijnath temple is considered as a part of Indian Heritage, so security arrangements are made here to avoid any unwanted element.

Water of this temple has medicinal properties