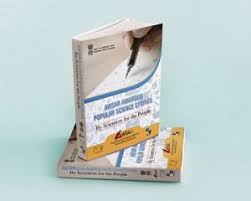 Science must reach to masses, but the technical language and jargons used in it make it difficult for people to understand it.  The Augmenting Writing Skills for Articulating Research (AWSAR) competition, launched by the Department of Science and Technology (DST), is an important initiative to make society aware about the importance of scientific research work in an easy to understand language.

To make it more accessible this year it has been linked to UMANG (Unified Mobile Application for New-age Governance) app. “AWASR has been linked to the UMANG app for ease to submit stories. Also, the last two years awardees would be invited to be a part of the workshops with journalists from different media. This will help us to have science communicators in all the existing mediums” told Dr Rashmi Sharma, Program In-charge, AWASR, DST. UMANG provides a single platform to access pan India e-Gov services ranging from Central to Local Government bodies and other citizen centric services.

‘AWSAR’ is an initative of National Science Technology Communication Council (NCSTC) that was launched on 24 January 2018. It aims to harness the potential of young scientists through newspapers, magazines, blogs and social media to popularize science and develop a scientific outlook in society.

It is an all-India competition in which doctoral and post-doctoral researchers in various disciplines of science and technology are asked to write articles in layman’s language, based on their research work. The main objective of this scheme is to encourage science researchers to become science communicators, so that they can help taking the complexities of scientific research in a simple language to the general public.  The articles should be in Hindi or English language in 1000 to 1500 words. 30th September 2020 will be the last date for sending the entries.

Under the competition, best articles are awarded for easy to comprehend presentation of scientific facts. The first prize for PhD researchers is Rs 1 lakh, second prize is Rs 50 thousand and third prize is Rs 25 thousand. The 100 selected articles written by PhD researchers will be given Rs 10,000 each. Similarly, under the Post Doctoral Fellow category, Rs 1 lakh will be awarded for outstanding articles and Rs 10 thousand each for 20 other selected entries.

The responsibility for the implementation and coordination of the ‘AWSAR’ program is being borne by Vigyan Prasar, an autonomous organization of the Department of Science and Technology.  “This initiative will help in disseminating the information of scientific researches in a language which can be easily understood by masses. It will help in creating new science communicators ” said Dr Nakul Parashar, Director, Vigyan Prasar.

More information about the competition can be found at www.awsar-dst.in. To send an entry, participants must register by visiting this website. The entries received under the competition will be evaluated by a team of scientists and science communicators formed by the Department of Science and Technology. Prizes will be presented on the occasion of National Science Day on 28 February next year to the selected young researchers under both PhD and Post Doctoral sections. (India Science Wire)